VyprVPN is a remarkably secure, zero logs VPN provider that sets out to keep its users safe and secure online with an array of great features. For those locked out in areas of high government censorship, their proprietary Chameleon™ protocol overcomes censorship barriers anywhere in the world which ideal for users in China, the UAE and India etc. And with servers in 70+ worldwide locations, decent speeds can be achieved whilst doing so. 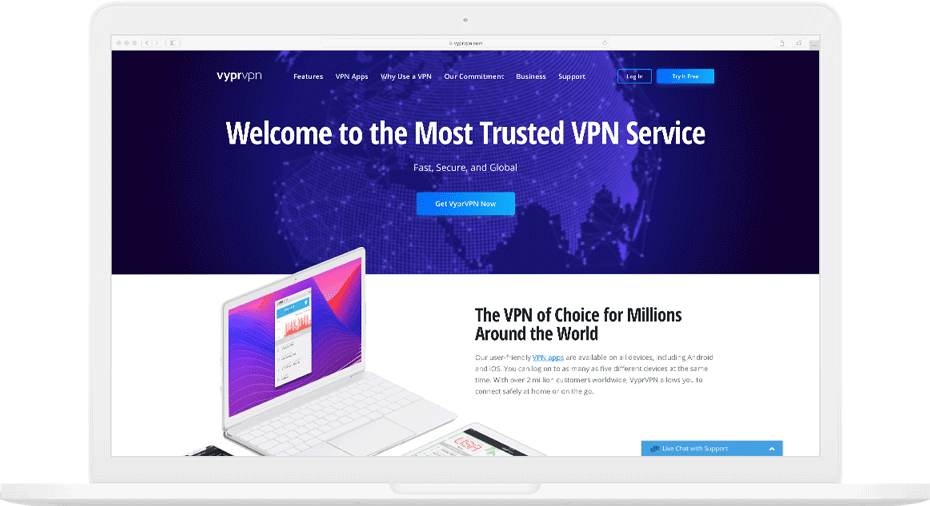 VyprVPN claim to be ‘The most trusted VPN service’ giving their users outstanding privacy protection, great speeds and a whole host of market leading features. A complete zero logs VPN (verified by a third-party audit!), it scores favourably here at CompareMyVPN HQ when it comes to security with its super strong encryption and advanced security features.

Top speeds and an abundance of features are delivered via upgraded global servers spanning 70+ countries. They also deploy proprietary technology in the form of Chameleon™ allowing users within or travelling to highly censored destinations such as China to browse the internet freely and safely.

For those looking at a VPN for unblocking geo-restricted content such as Netflix, BBC iPlayer and other popular streaming sources, it performs pretty acceptably, as well as being a logical choice for P2P and torrenting users with torrenting permitted on all of their servers as well as unlimited bandwidth.

Their user-friendly applications are super easy to use and both beginners and experienced VPN users will get to grips with in seconds.

With a 30-day money back guarantee and the offer a generous 3-day risk free trial before you buy, you can be sure that this is the right choice for you before you commit.

VyprVPN offers really good value for money when compared with many of its competitors given the quality of its product and its plans are available on monthly or yearly deals. Their 24 month plan represents the best value for money and is currently on special offer with 80% off when purchased through our website

For payment, VyprVPN currently accepts a wide range of options including most major debit and credit cards (including American Express), as well as PayPal.

When it comes to premium features, VyprVPN certainly doesn’t fall short. Your IP address is robustly protected by military grade AES-256 encryption, backed up by multiple VPN protocols ensuring your online activity is concealed, and unlike some VPN providers, they own all of their servers with no 3rd party involvement.

They are a complete no logs VPN and have also had their claims audited by a third party which is a pretty impressive confirmation! They clearly do as they promise!

With servers spread across 70+ countries giving access to 200,000+ IP addresses, they are certainly not short of offerings! Each server is clearly marked with a red, orange or green score, allowing the user to see which servers have the fastest ping levels (the lower the better / greens the best!).

You can stream all the content you wish without any limitations including Netflix, BBC iPlayer, live sporting events and other popular streaming sources, and P2P torrenting is permitted on all of their servers which is great news for our file sharing readers!

Users also benefit from proprietary technology called ‘Chameleon™’ which is their in-house version of stealth VPN. This allows users to truly explore the internet without restriction allowing you to bypass any government censorship as well as corporate and ISP firewalls that may restrict your access or slow your connection down.

Further features include automatic wi-fi protection when connecting to unsecure or public hotspots, a VPN kill switch and NAT firewall ensuring unwanted incoming traffic is blocked at all times.

VyprVPN’s allows its users to protect 5 devices simultaneously (recently upped from 3!) which should be enough for most of our readers, but could be argued these days that it’s still a little low in comparison to many of its competitors.

Their user-friendly apps can be installed on macOS, Windows & Linux operating systems as well as iOS and Android mobile devices. If using a Fire TV (Amazon Firestick) or Kodi is your thing… they’ve got you covered too, as well as Chrome and Firefox browser users. It’s also easy enough to configure your home router and protect your entire wi-fi network with a VyprVPN.

Accessing some of the best geo-restricted content is only possible with a VPN, and VyprVPN are pretty reliable at doing so. With great speeds and a good selection of servers, Netflix, BBC iPlayer, Hulu, Spotify, live sports events etc., sometimes censored by governments, are instantly unblocked with a click of a button. Whether you are at home or travelling abroad, their service won’t let you down. All you need to do is select a server from the country’s content you want to view (e.g. US for the US Netflix store and the UK for BBC iPlayer) and you’re all set!

VyprVPN is a great choice for torrenting as P2P traffic is permitted across all their servers and all your data is protected by their market leading security protection whilst doing so. With enhanced security features including the must have VPN kill switch as well as solid upload and download speeds, torrenting is smooth and reliable with VyprVPN.

VyprVPN are not the quickest premium provider we have tested but are equally far from the slowest! For general internet browsing or HD streaming, you won’t go far wrong.

During testing, we achieved speeds of around 72Mbps locally which is more than respectable, and an average global speed of 33Mbps when connecting from our offices here in the UK to a US server. Distant connections saw download speeds drop but connecting to far reaching locations such as New Zealand from the UK still delivered respectable speeds.

For gamers, low latency results make it a great choice for you guys/girls, and impressive upload speeds will suit those wanting a VPN for torrenting.

VyprVPN scores well for security thanks to its great array of top privacy features. Encryption is delivered by unbreakable AES-256 encryption ensuring your true IP address is kept hidden at all times. Our preferred Open VPN protocol also comes as default. They also use PPTP, L2TP/IPsec, IKEv2 and of course its own unique Chameleon™ protocol for obfuscation and bypassing censorship safely.

Additional features include DNS leak protection and the must have VPN kill switch which prevents you from leaking unencrypted activity in the event your VPN loses connection.

The VyprVPN applications are well designed and easy to use and can be downloaded on a whole host of popular devices such as iOS, Windows and Android, as well as on the Amazon Firestick or Android TV.

Beginners will get to grips with the product super easily with minimal options other than server select by country, or by ‘auto connect’ in the form of the ‘fastest server’ button. Each server is also measured via red, orange or green indicators showing users which has the faster ping levels which is also a nice extra feature.

For those looking for extra security whilst out and about, you can turn on ‘Public wi-fi Protection’ which gives your mobile devices full time protection when you are on the move and come into contact with unsecure public hotspots.

VyprVPN offers 24/7 live chat support and a ticket submission system should you need any assistance. They also provide lots of useful guides in its help section online to help you get the most from your VPN.

We tested their live chat at various different times and found on occasion there wasn’t an operative immediately available, but they did however always follow up our messages relatively quickly with an email answering our questions.

VyprVPN like many VPN companies claim to be a zero logs provider, but unlike 99% of its competitors, their claims have been independently audited and verified by a third-party. This gives them outstanding credibility and for those interested, their comprehensive report can be found here.

After reviewing this document, we are 100% confident VyprVPN keep zero logs and you’re as safe as houses with them!

VyprVPN operates from Switzerland which is a good location for privacy as it sits outside of the EU regulations and any government data sharing schemes. With such a strong zero logs policy, jurisdiction becomes less of an issue as even if law enforcement requested information, they don’t have any data to hand over in the first place.

VyprVPN are clearly a pretty decent choice for anyone in the market for purchasing a new VPN subscription but even more so for the highly security conscious or those living in areas of high government censorship. Their Chameleon™ technology defeats censorship by scrambling metadata to prevent deep packet inspection (DPI), VPN blocking and throttling, and is a really good addition to their security heavy product.

With a whole host of fantastic privacy features coupled with decent speeds achieved during testing, we’re confident users looking to purchase a VyprVPN for streaming HD content from the likes of US Netflix store, P2P torrenting, gaming, or simply staying safe online, really won’t be disappointed.

VyprVPN is up there with the best on the market and Melvyn and the team at comparemyvpn.com have no hesitation in recommending VyprVPN to our users!

Disclosure: CompareMyVPN is reader-supported. We may earn commissions if you purchase a VPN through a link found on our website.