FastestVPN has quickly cemented itself as a major player in the VPN market and as the name suggests, produces ultrafast connection speeds, offers high-end privacy, keeps zero logs and has the ability to unblock all our favourite content such as US Netflix, BBC iPlayer and much more. FastestVPN is super cheap too so for the price they charge, users can’t really have many complaints! 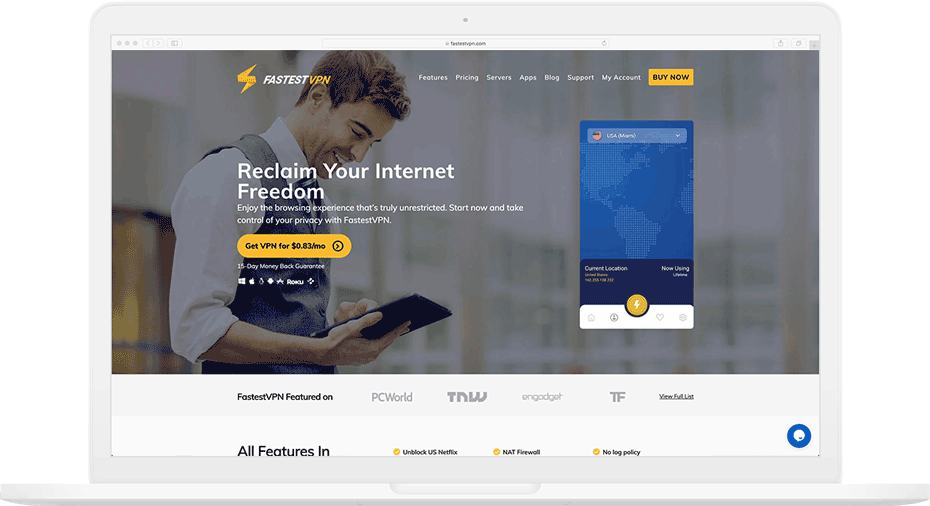 FastestVPN is quickly becoming a major force in the VPN industry and boldly claims to be the “world’s best and fastest VPN service”. Their claims are certainly a bit farfetched at present in our opinion when you compare their service with the likes of CyberGhost, but what we do know is that any user who purchases this VPN will get an extremely well packaged setup with a huge array of great features for an absolutely incredible price!

With some in-depth testing mixed in with some expert knowledge, it’s clear to us why millions of VPN users have chosen FastestVPN. Their ultrafast network of servers located in 52 countries across the globe are backed up by super strong user privacy credentials and a fantastic zero logs policy. Many advanced VPN features are included in their low costing subscription such as Ad blocker, NAT firewall and malware protection and users can protect up to 10 devices with just the one account which is overly generous! The FastestVPN applications are also a joy to use being super user friendly, and are compatible with pretty much all the internet devices you can imagine.

Streaming content in HD/4K is a breeze thanks to FastestVPN’s ability to unblock all the popular channels such as US Netflix, Amazon Prime, BBC iPlayer, Disney+ etc., and for users looking at large file sharing, P2P torrenting is also supported through high speed optimised VPN servers.

We also tested out their 24/7 live chat customer support which performed nicely, further justifying FastestVPN as a smart choice for those looking for great protection for under a dollar a month!

We just can’t get over the service these guys offer for under a dollar a month! Plans are available on monthly or yearly (1, 3 or 5) deals. Their 5 year plan represents the best value for money and is currently on special offer with 92% off when purchased through our website. You can also try before you buy with their 15-day money back guarantee should you not be happy with their service.

For payment, FastestVPN currently accepts a wide range of options including most major debit and credit cards (including American Express) as well as PayPal.

FastestVPN is full of great features making it a great all-round pick for the majority of VPN users, and especially those new to the VPN game with their super user-friendly applications.

Firstly, all the key security features we look for are present such as high-end military grade encryption, a selection of VPN protocols and a solid zero logs policy, making FastestVPN a really safe option for privacy concerned users. They also provide numerous advanced security features such as Ad blocker, NAT firewall and malware protection to keep external threats at bay from your personal data and devices.

With 550+ servers located in 52 countries, they are a little on the low side compared to many of their rivals, but their servers are located in some of the most popular locations ensuring users worldwide are never too far away from a fast connection.

Whilst using the app, users can only select from city level in the USA at present but we expect to see the number of locations increasing in the not so distant future. Their smart connect function allows users to get protected with just a single click, directing you to the best VPN server available for your location. Really handy if you’re after zero fuss protection.

At the time of testing, we were successfully able to unblock US Netflix, Disney+, Amazon Prime, BBC iPlayer and other popular channels making FastestVPN a great choice for those looking to unblock globabl entertainment channels.

With ultrafast VPN speeds and unlimited bandwidth, P2P file sharing is clean and simple, and the must have VPN kill switch keeps you protected at all times whilst doing so.

Finally, users can also use the handy split tunnelling feature to select any website or applications you don’t want the VPN to cover, allowing you to maintain access to your local networks without the need to turn on/turn off.

FastestVPN can protect pretty much any device currently out there making them a great choice for users with a whole host of different needs. They provide custom applications for Windows, Apple MacOS, iOS, Android, Linux and Amazon Fire TV, as well as providing browser extensions for Chrome and Firefox (which provide additional WebRTC leak protection and Ad blocker support).

FastestVPN will also work on Smart TV’s and games consoles and can be manually configured to work with wireless routers, turbo charging your privacy wherever you should need it.

When it comes to streaming, FastestVPN will suit most users’ needs with its ability to successfully overcome blocks on the most popular global entertainment channels such as Netflix, BBC iPlayer, Amazon Prime and the recently added Disney+. They offer dedicated US Netflix servers which are clearly labelled inside their VPN application, but you must be using UDP protocol to see them.

However, some providers offer a much more expansive list with regards to streaming channels inside their application and this is something we would like to see added in future. That said, users can still unblock all of the same channels with a their normal servers and are unlikely to encounter any buffering or connection issues, regardless of them being labelled a streaming server or not. 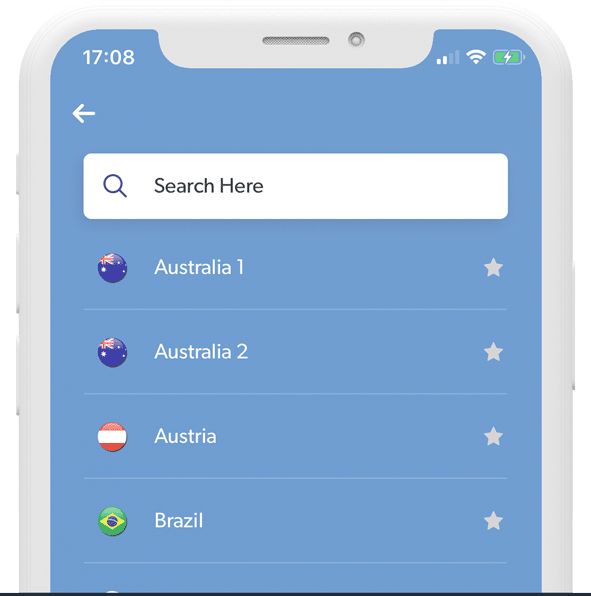 We feel that FastestVPN is an ideal choice for P2P file sharing as not only is torrenting permitted on all their servers, they offer unlimited bandwidth and ultrafast connection speeds at all times allowing users to benefit from some extremely high download/upload speeds. They also provide seriously robust security features concealing user activity from internet service providers (ISPs) so you can be sure to stay safe online whist torrenting with them.

We had super high expectations for FastestVPN given their name and their claims made across its website regarding speeds and thankfully we weren’t disappointed, recording some exceptional results. We performed numerous tests from our London HQ to ensure both local and international connections were up to scratch and generally they were.

Like with any VPN, the more distant the connection, the greater the speed will reduce, but FastestVPN performed consistently well across all locations. Whilst testing the ‘smart connect’ button inside their macOS and iOS apps (which is supposed to find you the most suitable connection), we did notice that it seemed to connect us to some surprisingly distant connections and although they were more than fast enough, we could get stronger results by making a manual choice to closer UK servers.

For local connections, there was virtually no drop in our original connection speed which is hugely impressive, and the service outperformed many big providers in this regard with download speeds of around 250Mbps consistently achieved. For distant connections to the USA from the UK, we got around 79Mbps which is mightily impressive and for servers across more local European connections such as Germany, France, Spain and the Netherlands, our connection averaged above 150Mbps demonstrating FastestVPN’s strong server infrastructure.

When it comes to user safety, FastestVPN certainly doesn’t compromise so our readers can be assured that it’s a perfectly secure VPN. When activated, your IP address is securely encrypted by industry leading and unbreakable AES-256 encryption, and they provide a variety of leading VPN protocols including our favoured Open VPN (TCP/UDP), IKEv2/IPsec, L2TP/IPsec, and PPTP. It’s worth noting however that some protocols are only available on certain devices so if in doubt, it’s worth checking on their website for more details.

We’re happy to report that during out testing we didn’t encounter any IP, DNS, or WebRTC leaks and it’s good to know that the built in VPN kill switch would have prevented our IP address being leaked should our connection have dropped.

Inside their app there is also a handy split tunnelling feature allowing you to route certain traffic (stay connected to local networks and devices such as printers) whilst your VPN is activated. There is also built in Ad blocker software preventing annoying third-party adverts from tracking your movements.

We also like the NAT firewall and malware protection they offer, further preventing unwanted traffic and external threats.

The super user-friendly FastestVPN apps are suitable for both beginners and advanced users and can be downloaded on a huge range of devices from iPhones to Amazon Firesticks to Windows operating systems and more!

Connecting to a VPN server is made simple with their ‘smart connection’ feature and navigating to servers from specific countries or even for steaming content such as US Netflix is also really easy to do.

The applications also smartly alert you when you are connecting to public or unsecured Wi-Fi, reminding you to turn on before any of your personal data is potentially compromised. 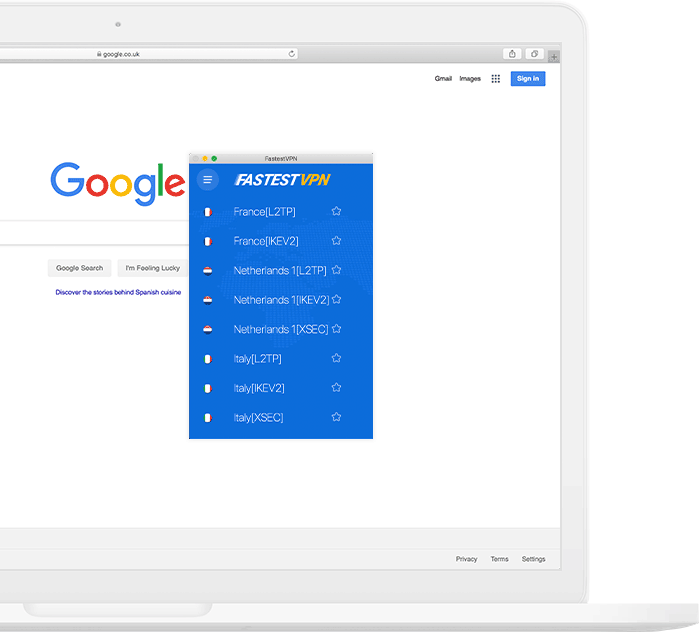 We tested out FastestVPN’s customer service with a range of queries and generally they performed very well. The support guides found on their website contain lots of information, and with the addition of the knowledgeable 24/7 live chat technical support team, we feel they have all the bases covered. If that’s not enough, users can also email over any questions and a member of their team will get back to you asap. When we emailed them with a test query, we received a response within 24 hours which we feel is pretty acceptable.

FastestVPN promise not to log or store any user data ensuring that users can browse the web in full anonymity, and their privacy policy reassuringly states: “FastestVPN Does Not Store Any Logs, Period!”.

The policy clearly outlines that any information or logs related to “your browsing history – the websites you visit, the content you download or stream, your traffic destinations, or your DNS queries – stays with you and you alone”.

The only information that FastestVPN keep is the email address you use to sign up for billing purposes. Once your account is deactivated, this email address will be destroyed and removed from their database. However, should you still be concerned, you could always use a burner email address just to get yourself setup.

To summarise, their strict zero logs policy combined with the in-depth tests our experts have carried out allows us to happily recommend FastestVPN as a safe and secure no logs VPN.

FastestVPN is owned by Fast Technology Limited and is registered in the highly privacy friendly jurisdiction of the Cayman Islands. There are no mandatory data retention laws the Cayman Islands and the country is not subject to any international data sharing organisations such as the Five Eyes Network.

The team here at CompareMyVPN HQ are hugely impressed by the service offered by FastestVPN, particularly down to the brilliant service they offer for such a low monthly cost, delivering some truly great speeds whilst protecting users at all times with a whole host of military grade security features.

For entertainment lovers out there, their service is a great choice as it can successfully unblock US Netflix, Disney+, BBC iPlayer and many other popular streaming sites with the click of a button.

FastestVPN is slightly held back due to its relatively small network of servers compared to many other big name providers, and is also marked down by the fact that it won’t reliably overcome the Great firewall of China. This however will not be such a big deal for many of our readers we’re sure, but worth mentioning, nonetheless.

Melvyn and the team at comparemyvpn.com certainly think it’s worth our readers considering FastestVPN for their first/next VPN sub because at this price, paired with their 15-day moneyback guarantee, what’s there to lose?

Disclosure: CompareMyVPN is reader-supported. We may earn commissions if you purchase a VPN through a link found on our website.